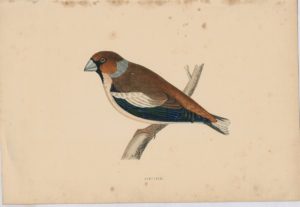 This bird breeds across Europe and temperate Asia. It is mainly resident in Europe, but many Asian birds migrate further south in the winter. It is a rare vagrant to the western islands of Alaska.

Deciduous or mixed woodland, including parkland, with large trees – especially hornbeam – is favoured for breeding. The hawfinch builds its nest in a bush or tree, and lays 2-7 eggs. The food is mainly seeds and fruit kernels, especially those of cherries, which it cracks with its powerful bill. This large finch species is usually seen in a pair or small group.

The 16.5–18 cm long hawfinch is a bulky bull-headed bird, which appears very short-tailed in flight. Its head is orange-brown with a black eyestripe and bib, and a massive bill, which is black in summer but paler in winter. The upper parts are dark brown and the underparts orange.The hawfinch was described and illustrated by Swiss naturalist Conrad Gesner in his Historiae animalium in 1555.[2] He used the Latin name Coccothraustes which is derived from the Greek: kokkos is a seed or kernel and thrauō means to break or to shatter.[3] In 1758 Carl Linnaeus included the species in the 10th edition of his Systema Naturae under the binomial name Loxia coccothraustes.[4][5] The hawfinch was moved to a separate genus Coccothraustes by the French zoologist Mathurin Jacques Brisson in 1760.[4][6][7] The English name ‘hawfinch’ was used by the ornithologist Francis Willughby in 1676.[8][9] Haws are the red berries of the common hawthorn Crataegus monogyna.

Molecular phylogenetic studies have shown that the hawfinch is closely related to other grosbeaks in the Eophona, Hesperiphona and Mycerobas genera. Finches with large beaks in the Rhynchostruthus and Rhodospiza genera are not closely related. The similar bill morphology is the result of convergence due to the similar feeding behaviour.[10]

There are six recognised subspecies:[12]