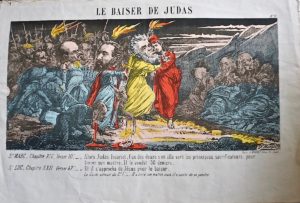 ‘Le Baiser de Judas’, Paris Commune, 1871. This Print comparing the downfall of the Paris Commune to the betrayal of Christ by Judas’ kiss. An allegory of the Commune fills the place of Jesus. The Paris Commune was established when the citizens of Paris, many of them armed National Guards, rebelled against the policies of the conservative government formed after the end of the Franco-Prussian War. The left-wing regime of the Commune held sway in Paris for two months until government troops retook the city in bloody fighting in May 1871. The events of the Commune were an inspiration to Karl Marx as well as later communist leaders including Lenin, Trotsky and Mao.