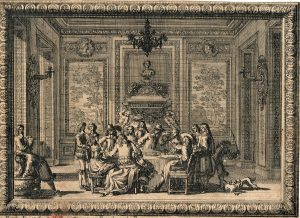 Pierre-Jean Mariette (7 May 1694 – 10 September 1774) was a collector of and dealer in old master prints, a renowned connoisseur, especially of prints and drawings, and a chronicler of the careers of French Italian and Flemish artists. He was born and died in Paris, and was a central figure in the artistic culture of the city for decades.

Mariette was born to a long-established and highly successful family of engravers, book publishers and printsellers in Paris; his father was Jean Mariette. When his grandfather Pierre Mariette (1634–1716) bought the business from his father in 1657, it was valued at 30,000 livres.[1] The family connections put him in contact as a young man with antiquarians such as the comte de Caylus, for whom Mariette would write his Lettre sur Leonardo da Vinci, printed as a preface to Caylus’s book on Leonardo’s caricatures, 1730. In 1722 he first met the immensely rich patron of the arts Pierre Crozat, whom he advised, whose collection he catalogued and from whose sale he purchased outstanding drawings.

After he attended the Jesuit college in Paris, his father, Jean Mariette (1660–1742), sent him on tour in 1717, to sharpen his connoisseurship and further family connections. First he went to Amsterdam, which was the center of the art trade, and then to Germany. In Vienna Mariette catalogued the art collection of Prince Eugene of Savoy. Everywhere the affable, curious and sociable Mariette made acquaintances and formed contacts with the scholarly and artistic community in Europe, which he maintained through correspondence…