Rare Antique Engraving Print, Embarkation and Landing of the Duchess of Berry, 1810 ca. 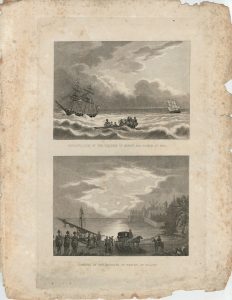 Embarkation and Landing of the Duchess of Berry, 1810 ca., credit Antiche Curiosità©

Embarkation and Landing of the Duchess of Berry, 1810 ca., credit Antiche Curiosità©

Marie-Caroline de Bourbon-Sicile, duchesse de Berry[1] (Maria Carolina Ferdinanda Luise; 5 November 1798 – 17 April 1870) was an Italian princess of the House of Bourbon who married into the French royal family, and was the mother of Henri, Count of Chambord.

Caroline was born at Caserta Palace in Naples. She was the eldest child of Prince Ferdinand, the future King Francis I of the Two Sicilies and his first wife, Archduchess Maria Clementina of Austria, the tenth child and third daughter of Leopold II, Holy Roman Emperor and Maria Luisa of Spain. Her parents were double first cousins.

Caroline was baptised with the names of her paternal grandparents, Maria Carolina of Austria and King Ferdinand of Naples, as well as her maternal grandmother Maria Luisa, Holy Roman Empress.

She spent her youth in Palermo and in Naples. Her mother died in 1801; her father married again in 1802 to Infanta Maria Isabella of Spain, another first cousin, and had twelve more children.

In 1816, French ambassador Pierre Louis Jean Casimir de Blacas arranged with the Kingdoms of Naples and Sicily [a] for Caroline to marry Louis XVIII of France‘s nephew, Charles Ferdinand, Duke of Berry. The marriage was held on 24 April 1816 in Naples. Caroline thus became Duchesse de Berry; known as Madame de Berry in France.

Even though it was arranged, the marriage was happy, with Caroline and her husband living at the Élysée Palace in Paris which was given to them…

Be the first to review “Rare Antique Engraving Print, Embarkation and Landing of the Duchess of Berry, 1810 ca.” Cancel reply