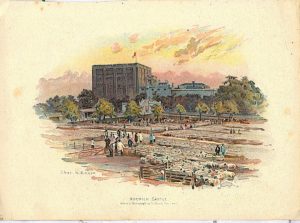 Norwich Castle is a medieval royal fortification in the city of Norwich, in the English county of Norfolk. It was founded in the aftermath of the Norman conquest of England when William the Conqueror (1066–1087) ordered its construction because he wished to have a fortified place in the important city of Norwich. It proved to be his only castle in East Anglia. It is one of the Norwich 12 heritage sites. In 1894 the ‘Norwich Museum’ moved to Norwich Castle and it has been a museum ever since. It is now known as Norwich Castle Museum & Art Gallery, and holds significant objects from the region, especially archaeological finds and natural history specimens.

Norwich is one of 48 castles mentioned in the Domesday Survey of 1086. Building a castle in a pre-existing settlement could require demolishing properties on the site. At Norwich, estimates vary that between 17 and 113 houses occupied the site of the castle.[4] Excavations in the late 1970s discovered that the castle bailey was built over a Saxon cemetery.[5] Historian Robert Liddiard remarks that “to glance at the urban landscape of Norwich, Durham or Lincoln is to be forcibly reminded of the impact of the Norman invasion”.[6] Until the construction of Orford Castle in the mid-12th century under Henry II, Norwich was the only major royal castle in East Anglia.