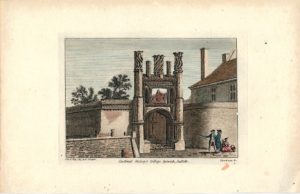 Cardinal Thomas Wolsey, the future cardinal, was born in Ipswich about 1473 as the son of a wealthy landowner. One of Henry VIII‘s closest political allies, he founded a college in the town in 1528, which was for its brief duration one of the homes of the Ipswich School. He remains one of the town’s most famed figures. This antique print is from: ‘The Antiquities of England and Wales’ by Francis Grose. Eight volumes published from 1772. Printed in London for Hooper and Wigstead. Artists and engravers names are recorded below each antique print, together with the date of the engravings execution.  Francis Grose’s interest was in the field of medieval remains, which were beginning to exercise an increasing grip on the public imagination. In 1772, he published the first part of ‘The Antiquities of England and Wales,’ a work which he unashamedly aimed at the popular market. Essentially, it targeted those who wanted to know about antiquities but had neither time nor means to visit them in person, and contained small panoramas of medieval ruins, together with an informative text on a separate page. Sometimes the text was taken from books already published, or from information supplied by other antiquaries (both acknowledged); sometimes Grose collated material himself from which he could work up an article. From 1772 onwards, he also toured the country to visit and draw sites for inclusion in The Antiquities. In all, Eight Volumes of the work were published.