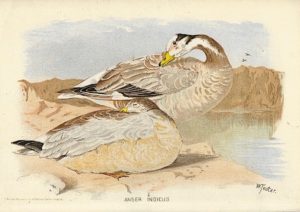 The European goldfinch or goldfinch (Carduelis carduelis), is a small passerine bird in the finch family that is native to Europe, North Africa and western Asia. It has been introduced to other areas including Australia, New Zealand and Uruguay.

The goldfinch has a red face and a black-and-white head. The back and flanks are buff or chestnut brown. The black wings have a broad yellow bar. The tail is black and the rump is white. Males and females are very similar, but females have a slightly smaller red area on the face.

The goldfinch is often depicted in Italian renaissance paintings of the Madonna and Child.

goldfinch was one of the birds described and illustrated by Swiss naturalist Conrad Gesner in his Historiae animalium of 1555.[2] The first formal description was by Carl Linnaeus in the 10th edition of his Systema Naturae published in 1758. He introduced the binomial name, Fringilla carduelis.[3][4] Carduelis is the Latin word for a goldfinch.[5] The genus Carduelis was introduced by the French zoologist Mathurin Jacques Brisson in 1760 by tautonomy based on Linneus’s specific epithet.[6][7]Modern molecular genetic studies have shown that the European goldfinch is closely related to the citril finch, (Carduelis citrinella) and the Corsican finch, (Carduelis corsicana).[8]

The English word ‘goldfinch’ was used in the second half of the 14th century by Geoffrey Chaucer in his unfinished The Cook’s Tale: “Gaillard he was as goldfynch in the shawe (Gaily dressed he was as is a goldfinch in the woods)”.[9]

Chromolithography, or the technique of “printing in colors,” had a dazzling and meteoric life. After centuries of black ink on white paper, chromo-lithography burst onto the American scene about 1840 and then vanished by the 1930s. But during this nearly one hundred year period, chromolithography revolutionized the printing industry and intoxicated the world with lush colorful hues. It transformed calling cards, wedding announcements, greeting cards, tickets, cigar box labels, advertising posters and many other types of printed ephemera into eye-catching works of art that proved too beautiful to be thrown away after temporary use.