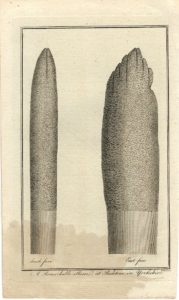 The Rudston monolith is the tallest prehistoric standing stone in Britain, standing almost 8 metres high, nearly 2 metres wide, a metre thick and weighing somewhere in the region of 26 tons. This giant block of grey sandstone or gritstone was quarried 10 miles away at Cayton Bay and was brought here either in the late Neolithic or early Bronze Age. The Norman churchyard of All Saints that it stands in is of course some 3000 years younger although the Christianisation of this raised site probably took place much earlier. The top of the stone has been weathered and eroded into a fluted peak similar to the stones of the Devil’s Arrows and a lead cap was first added to try to preserve it in the 18th century, an ironic touch, as it was here long before the church, and will probably remain long after the church has gone. In the corner of the churchyard is a much smaller standing stone and also the remains of a double cist that was removed from a nearby barrow on Rudston Beacon by the antiquarian Canon Greenwell in the late 19th century. The monolith stands close to the Gypsey Race, an occasional stream that runs along the floor of the Great Wold Valley from close to Duggleby Howe in the east, past Wold Newton and Willie Howe before turning south past the Argham Henge and Cursus down to Rudston itself where it bends sharply and heads eastwards to the sea at Bridlington. The name ‘Bridlington’ itself is probably derived from the pre-Roman goddess of Bridget (or Brid) The whole of the Gypsey Race landscape was obviously important in prehistoric times and has a rich selection of sites, most of which have been destroyed or badly damaged by ploughing, including many round barrows, several long barrows, four cursuses and at least one henge. It continued to retain its importance into the historic period – a major Roman villa was discovered to the southwest of Rudston village.

Be the first to review “Rare Antique Engraving Print, A Remarkable Stone at Rudstone in Yorkshire, 1770 ca.” Cancel reply