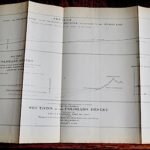 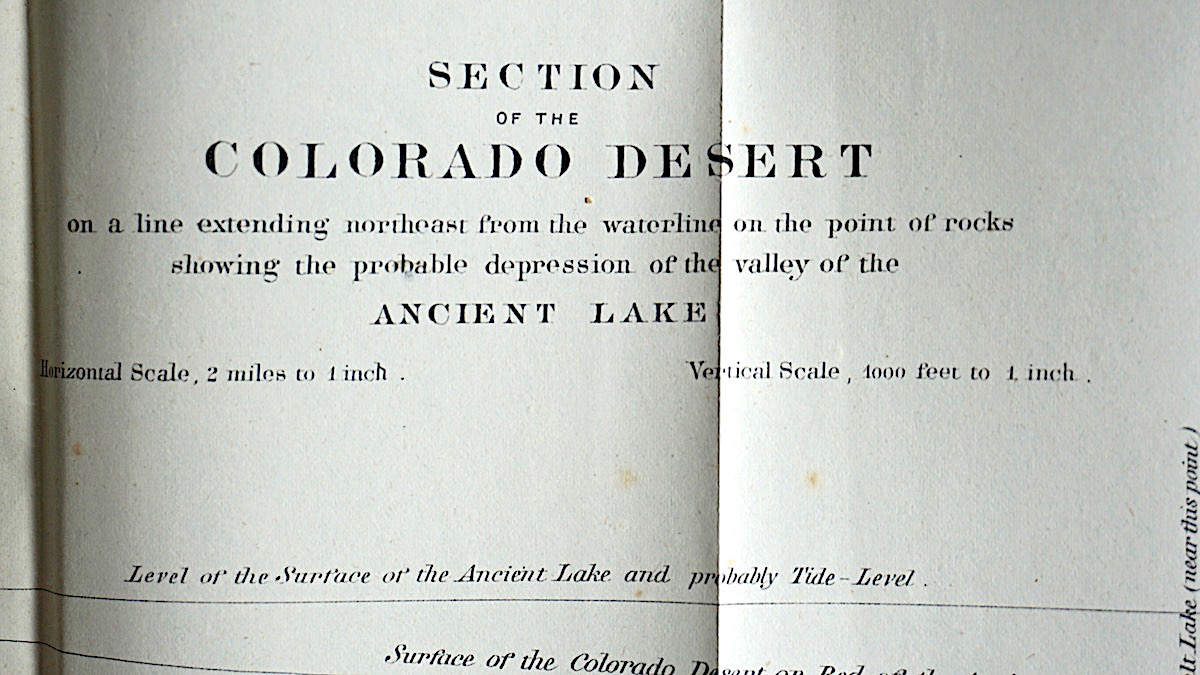 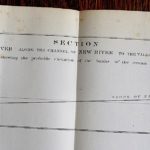 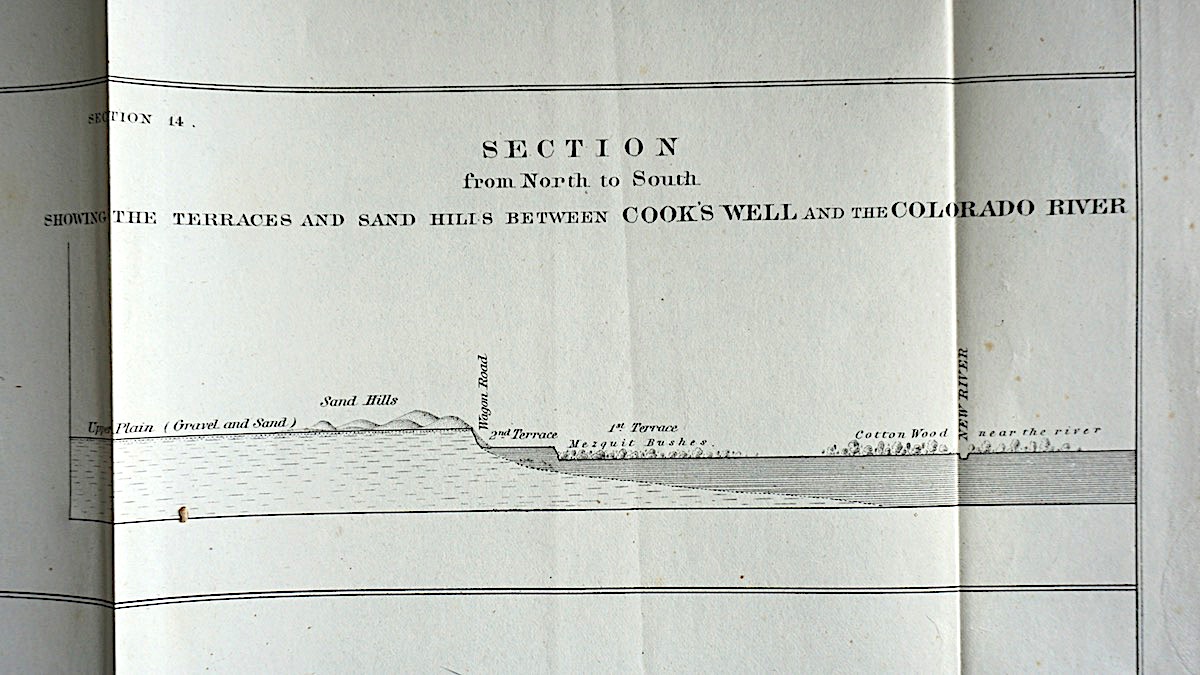 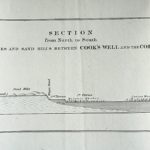 Antique Section Across the Colorado River-Desert, 1853 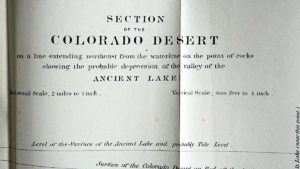 Antique Section Across the Colorado River along the Channel of New River to the Valley of the Ancient Lake showing the probable elevation of the banks of the stream, 1853; Section of the Colorado Desert on a line extending northeast from the waterline on the point of rocks showing the probable depression of the valley of the Ancient Like; Sections of the Colorado Desert explored by Lieut R.S. Williamson corps in 1853, prepared in the Office of Pacific Rail Road Exploration and Survey war department by William P. Blake. Foldable. cm. 76 x 29.

Antique Section Across the Colorado River along the Channel of New River to the Valley of the Ancient Lake showing the probable elevation of the banks of the stream, 1853; Section of the Colorado Desert on a line extending northeast from the waterline on the point of rocks showing the probable depression of the valley of the Ancient Like; Sections of the Colorado Desert explored by Lieut R.S. Williamson corps in 1853, prepared in the Office of Pacific Rail Road Exploration and Survey war department by William P. Blake. Foldable. cm. 76 x 29.

In this region, the geology is dominated by the transition of the tectonic plate boundary from rift to fault. The southernmost strands of the San Andreas Fault connect to the northernmost extensions of the East Pacific Rise. Consequently, the region is subject to earthquakes, and the crust is being stretched, which will result in a sinking of the terrain over time.

The Colorado Desert’s climate distinguishes it from other deserts. The region experiences greater summer daytime temperatures than higher-elevation deserts and almost never experiences frost. In addition, the Colorado Desert experiences two rainy seasons per year (in the winter and late summer), especially toward the southern portion of the region; the more northerly Mojave Desert usually has only winter rains.[4][5]

The west coast Peninsular Ranges, or other west ranges, of Southern California–northern Baja California, block most eastern Pacific coastal air and rains, producing an arid climate.[4] Other short or longer-term weather events can move in from the Gulf of California to the south, and are often active in the summer monsoons. These include remnants of Pacific hurricanes, storms from the southern tropical jetstream, and the northern ITCZ.

The Colorado River is one of the principal rivers of the Southwestern United States and northern Mexico (the other being the Rio Grande). The 1,450-mile-long (2,330 km) river drains an expansive, arid watershed that encompasses parts of seven U.S. and two Mexican states. Starting in the central Rocky Mountains of Colorado, the river flows generally southwest across the Colorado Plateau and through the Grand Canyon before reaching Lake Mead on the Arizona–Nevada border, where it turns south toward the international border. After entering Mexico, the Colorado approaches the mostly dry Colorado River Delta at the tip of the Gulf of California between Baja California and Sonora.

Known for its dramatic canyons, whitewater rapids, and eleven U.S. National Parks, the Colorado River and its tributaries are a vital source of water for 40 million people.[6] The river and its tributaries are controlled by an extensive system of dams, reservoirs, and aqueducts, which in most years divert its entire flow for agricultural irrigation and domestic water supply.[7][8] Its large flow and steep gradient are used for generating hydroelectric power, and its major dams regulate peaking power demands in much of the Intermountain West. Intensive water consumption has dried up the lower 100 miles (160 km) of the river, which has rarely reached the sea since the 1960s.[7][9][10]

Beginning with small bands of nomadic hunter-gatherers, Native Americans have inhabited the Colorado River basin for at least 8,000 years. Between 2,000 and 1,000 years ago, the watershed was home to large agricultural civilizations – considered some of the most sophisticated indigenous North American cultures – which eventually declined due to a combination of severe drought and poor land use practices. Most native peoples that inhabit the region today are descended from other groups that settled there beginning about 1,000 years ago. Europeans first entered the Colorado Basin in the 16th century, when explorers from Spain began mapping and claiming the area, which became part of Mexico upon its independence in 1821. Early contact between Europeans and Native Americans was generally limited to the fur trade in the headwaters and sporadic trade interactions along the lower river.

After most of the Colorado River basin became part of the U.S. in 1846, much of the river’s course was still the subject of myths and speculation. Several expeditions charted the Colorado in the mid-19th century – one of which, led by John Wesley Powell, was the first to run the rapids of the Grand Canyon. American explorers collected valuable information that was later used to develop the river for navigation and water supply. Large-scale settlement of the lower basin began in the mid- to late-19th century, with steamboats providing transportation from the Gulf of California to landings along the river that linked to wagon roads to the interior. Starting in the 1860s, gold and silver strikes drew prospectors to parts of the upper Colorado River basin.

Large engineering works began around the start of the 20th century, with major guidelines established in a series of international and U.S. interstate treaties known as the “Law of the River”. The U.S. federal government was the main driving force behind the construction of dams and aqueducts, although many state and local water agencies were also involved. Most of the major dams were built between 1910 and 1970; the system keystone, Hoover Dam, was completed in 1935. The Colorado is now considered among the most controlled and litigated rivers in the world, with every drop of its water fully allocated.

The environmental movement in the American Southwest has opposed the damming and diversion of the Colorado River system because of detrimental effects on the ecology and natural beauty of the river and its tributaries. During the construction of Glen Canyon Dam, environmental organizations vowed to block any further development of the river, and a number of later dam and aqueduct proposals were defeated by citizen opposition. As demands for Colorado River water continue to rise, the level of human development and control of the river continues to generate controversy.

Be the first to review “Antique Section Across the Colorado River-Desert, 1853” Cancel reply