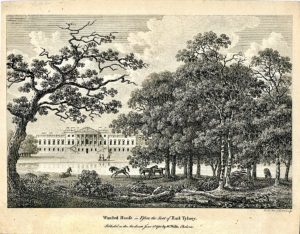 Wanstead House was a mansion built to replace the earlier Wanstead Hall. It was commissioned in 1715, completed in 1722 and demolished in 1825. Its gardens now form the municipal Wanstead Park in the London Borough of Redbridge.

Sir Richard Child gathered large estates, including Wanstead Manor, partly by his 1703 marriage to Dorothy Glynne, whose mother was of the Tylney family of Tylney Hall in Rotherwick, Hampshire. In 1715 Child commissioned the Scottish architect Colen Campbell to design a grand mansion in the then emerging Palladian style, to replace the former house, and to rival contemporary mansions such as Blenheim Palace. When completed in 1722 it covered an area of 260 ft (79 m). by 70 ft (21 m), the facade having a portico with six Corinthian columns, the earliest in England.[1]

During the house’s construction, in 1718, Child had been created 1st Viscount Castlemaine. When Child’s wife’s cousin Ann Tylney died in 1730, Dorothy and her husband Viscount Castlemain inherited the Tylney estates. Castlemain was created 1st Earl Tylney the following year (1731) and in 1734 obtained an Act of Parliament to change the name of his family, including his heirs, from the patronymic to Tylney, probably to meet a condition of his wife’s inheritance. On the death of the Earl in 1750 he was succeeded by his 38-year-old son John Tylney, 2nd Earl Tylney. When the 2nd Earl died without male issue in 1784, the estates passed to his elder sister Emma’s son Sir James Long, 7th Baronet, who being then in possession of the vast estates of the Longs, the Childs and the Tylneys, assumed the surname Tylney-Long for himself and his descendants, again probably in accordance with a requirement of the inheritance. On the death of the 7th Baronet in 1794 the combined estate passed to his one-year-old infant son Sir James Tylney-Long, 8th Baronet, who died in 1805 aged just 11. The estate then passed to his young sister, eldest of three, Catherine Tylney-Long, who thereby became the richest heiress in England. [2]