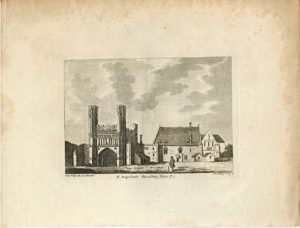 St Augustine’s Abbey was a Benedictine abbey in Canterbury, Kent, England.In the year 597, Saint Augustine arrived in England, having been sent by Pope Gregory I, on what might nowadays be called a revival mission. The King of Kent at this time was Ethelbert, who happened to be married to a Christian, Bertha. Whether or not his spouse influenced him, he allowed Augustine to found a monastery just outside the walls of Canterbury. In 1390 the gatehouse that still survives was built. The last thing to be built was a Lady Chapel, to the east of the church.

In 1535, Henry VIII dissolved all monasteries found to have an annual income less than £100. It survived this first round of closures, as its income was found to be £1733. But on July 30, 1538, the abbey’s fate was sealed when it fell to the dissolution of Henry VIII. The abbey was systematically dismantled over the next fifteen years, although part of the site was converted to a palace, ready for the arrival of Anne of Cleves, from France.This palace was leased to a succession of nobles, and in the early 1600s was in the possession of Edward Lord Wotton, who employed John Tradescant the elder, to lay out formal gardens around it. This palace is thought to have survived until a great storm in 1703, which certainly caused great damage to the already ruinous structure of the abbey. Now a World Heritage Site, the ruins of this important monastic foundation built by Saint Augustine are in the care of English Heritage. Today the ruin precincts cover a substantial area east of the cathedral, and in fact, in its heyday the church rivalled the nearby Canterbury Cathedral in size.