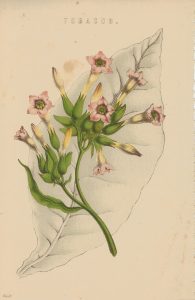 Tobacco is the common name of several plants in the Nicotiana genus and the Solanaceae (nightshade) family, and the general term for any product prepared from the curedleaves of the tobacco plant. More than 70 species of tobacco are known, but the chief commercial crop is N. tabacum. The more potent variant N. rustica is also used around the world.

Tobacco contains the stimulant alkaloid nicotine as well as harmala alkaloids.[2] Dried tobacco leaves are mainly used for smoking in cigarettes, cigars, pipes, shishas as well as E-Cigarettes (both rechargeable and disposable), E-Cigars, E-Pipes and Vaporizers. They can also be consumed as snuff, chewing tobacco, dipping tobacco and snus.

Tobacco use is a risk factor for many diseases; especially those affecting the heart, liver, and lungs, as well as many cancers. In 2008, the World Health Organization named tobacco use as the world’s single greatest preventable cause of death.[3]

The English word “tobacco” originates from the Spanish and Portuguese word “tabaco“. The precise origin of this word is disputed, but it is generally thought to have derived at least in part, from Taino, the Arawakan language of the Caribbean. In Taino, it was said to mean either a roll of tobacco leaves (according to Bartolomé de las Casas, 1552) or to tabago, a kind of L-shaped pipe used for sniffing tobacco smoke (according to Oviedo; with the leaves themselves being referred to as cohiba).[4][5]

However, perhaps coincidentally, similar words in Spanish, Portuguese and Italian were used from 1410 to define medicinal herbs believed to have originated from the Arabic طُبّاق ṭubbāq (also طُباق ṭubāq), a word reportedly dating to the 9th century, as a name for various herbs.[6][7]