View basket “Vintage Handmade Terracotta Sculpture, 1986” has been added to your basket. 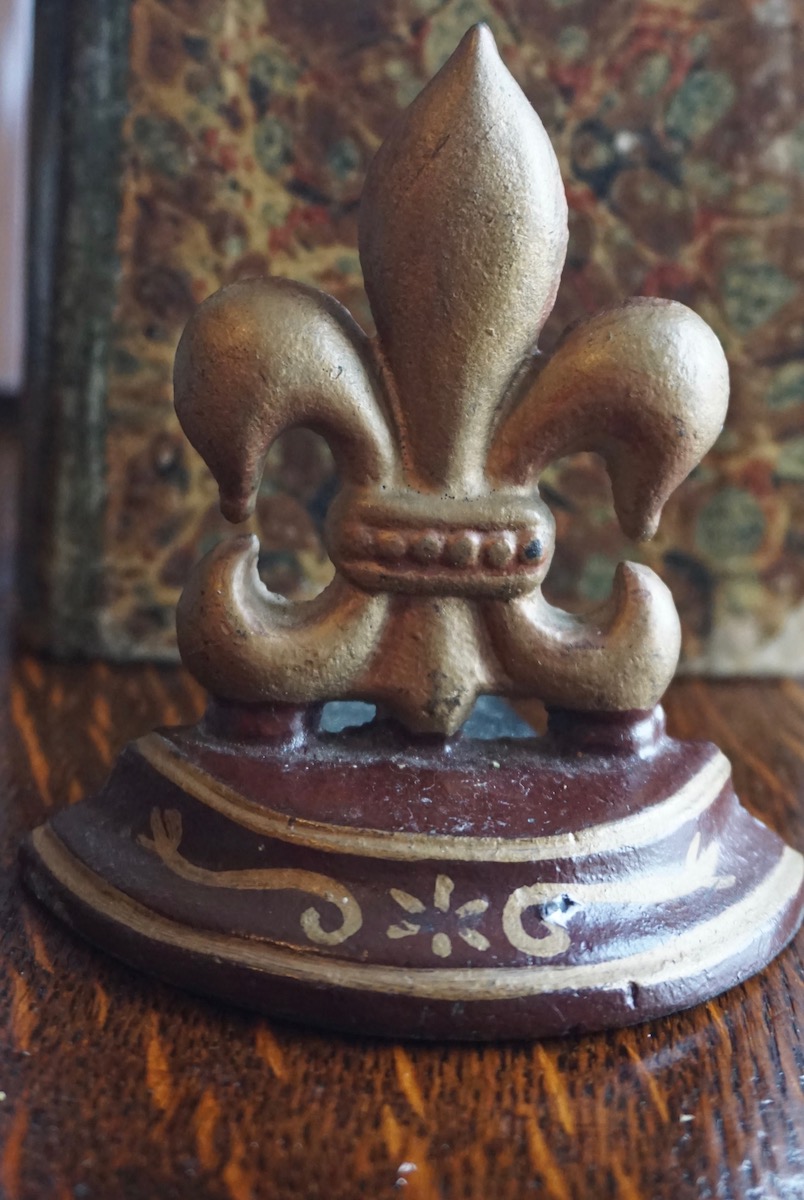 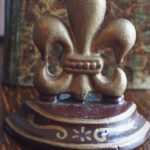 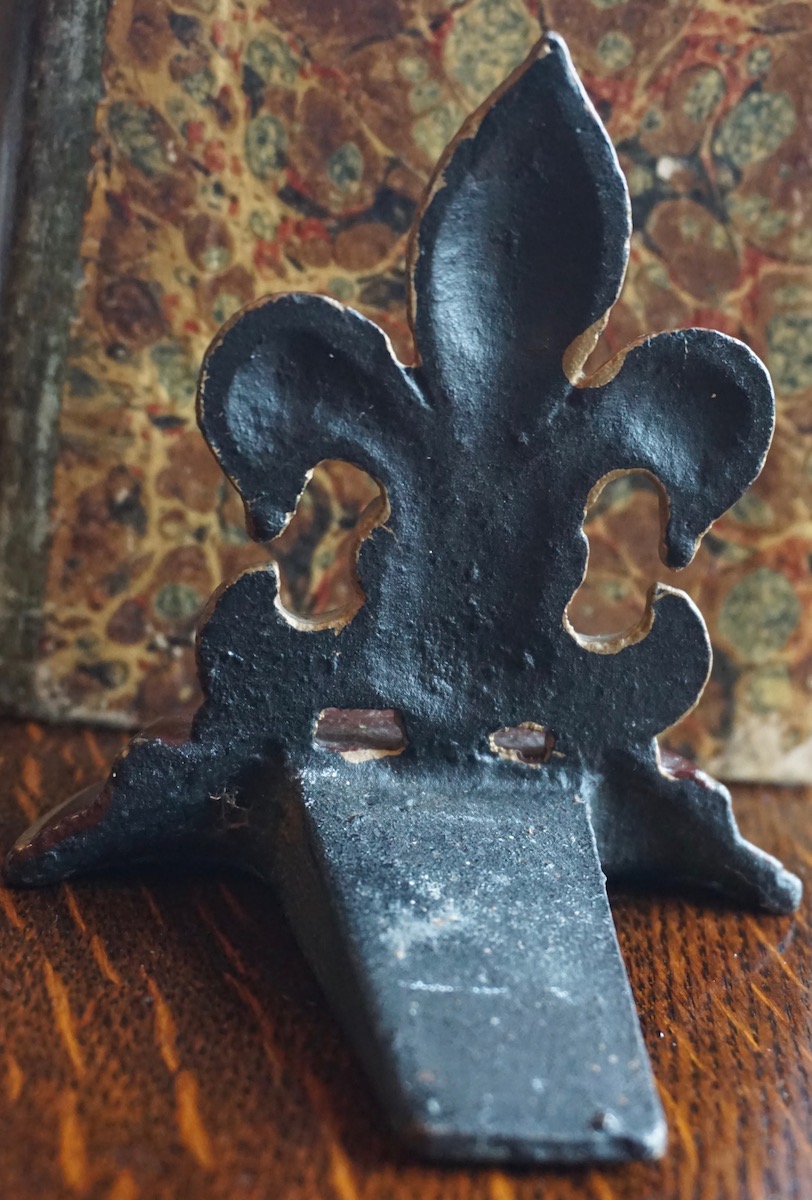 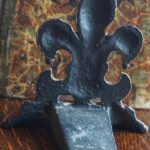 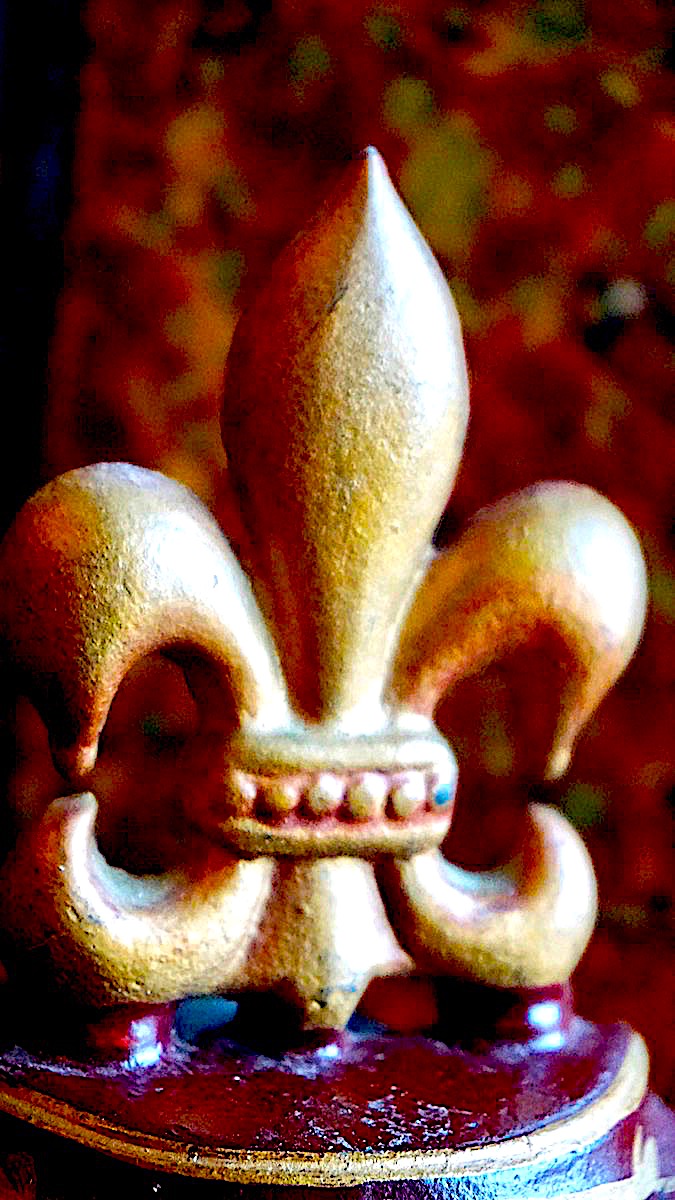 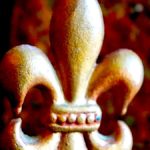 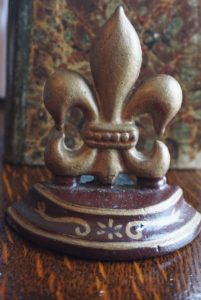 The fleur-de-lis/fleur-de-lys (plural: fleurs-de-lis/fleurs-de-lys)[pron 1] or flower-de-luce is a stylized lily (in French, fleur means “flower”, and lis means “lily”) that is used as a decorative design or motif, and many of the Catholic saints of France, particularly St. Joseph, are depicted with a lily. Since France is a historically Catholic nation, the fleur-de-lis became “at one and the same time, religious, political, dynastic, artistic, emblematic, and symbolic”, especially in French heraldry.[4]

The fleur-de-lis is represented in Unicode at U+269C (⚜) in the Miscellaneous Symbols block.The fleur de lis is widely thought to be a stylized version of the species Iris pseudacorus, or Iris florentina.[17][18] However, the lily (genus lilium, family Liliaceae) and the iris (family Iridaceae) are two different plants, phylogenetically and taxonomically unrelated. Lily (in Italian: giglio) is the name usually associated with the stylized flower in the Florentine heraldic devices. Decorative ornaments that resemble the fleur-de-lis have appeared in artwork from the earliest human civilizations.[peacock term] According to Pierre-Augustin Boissier de Sauvages, an 18th-century French naturalist and lexicographer:[19]

The old fleurs-de-lis, especially the ones found in our first kings’ sceptres, have a lot less in common with ordinary lilies than the flowers called flambas [in Occitan], or irises, from which the name of our own fleur-de-lis may derive. What gives some colour of truth to this hypothesis that we already put forth, is the fact that the French or Franks, before entering Gaul itself, lived for a long time around the river named Leie in the Flanders. Nowadays, this river is still bordered with an exceptional number of irises —as many plants grow for centuries in the same places—: these irises have yellow flowers, which is not a typical feature of lilies but fleurs-de-lis. It was thus understandable that our kings, having to choose a symbolic image for what later became a coat of arms, set their minds on the iris, a flower that was common around their homes, and is also as beautiful as it was remarkable. They called it, in short, the fleur-de-lis, instead of the flower of the river of lis. This flower, or iris, looks like our fleur-de-lis not just because of its yellow colour but also because of its shape: of the six petals, or leaves, that it has, three of them are alternatively straight and meet at their tops. The other three on the opposite, bend down so that the middle one seems to make one with the stalk and only the two ones facing out from left and right can clearly be seen, which is again similar with our fleurs-de-lis, that is to say exclusively the one from the river Luts whose white petals bend down too when the flower blooms.

The heraldist François Velde is of the same opinion.[20]

However, a hypothesis ventured in the 17th c. sounds very plausible to me. One species of wild iris, the Iris pseudacorus, yellow flag in English, is yellow and grows in marshes (cf. the azure field, for water). Its name in German is Lieschblume (also gelbe Schwertlilie), but Liesch was also spelled Lies and Leys in the Middle Ages. It is easy to imagine that, in Northern France, the Lieschblume would have been called “fleur-de-lis.” This would explain the name and the formal origin of the design, as a stylized yellow flag. There is a fanciful legend about Clovis which links the yellow flag explicitly with the French coat of arms.