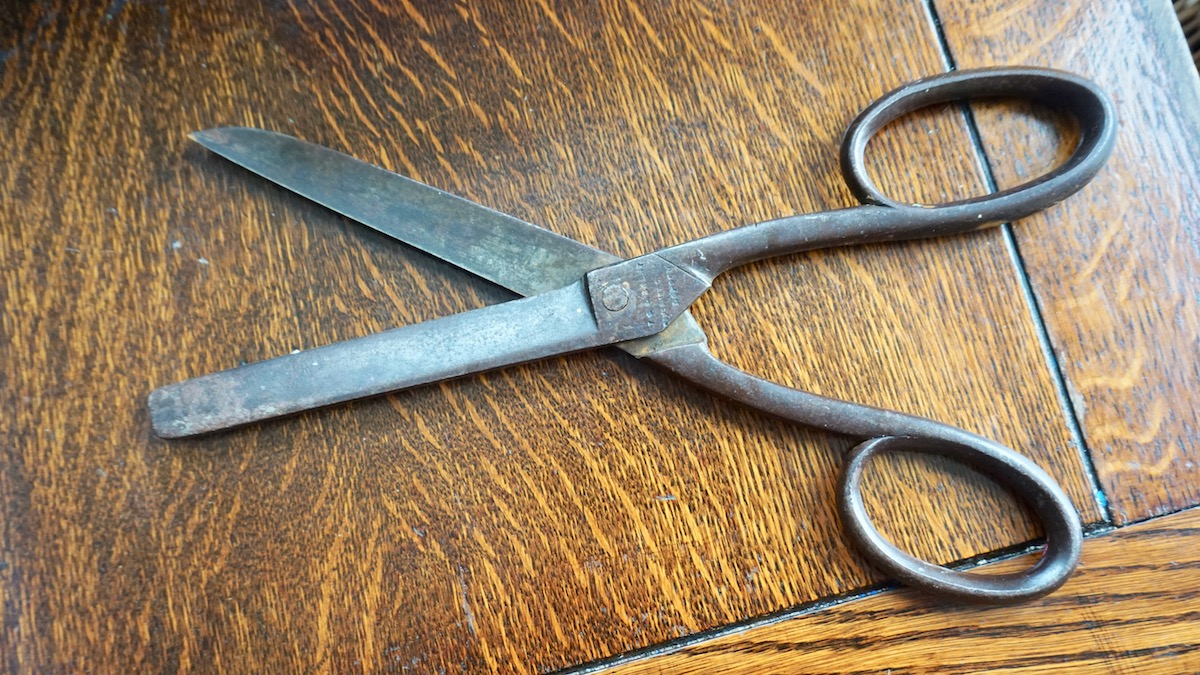 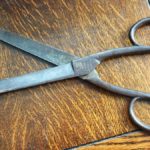 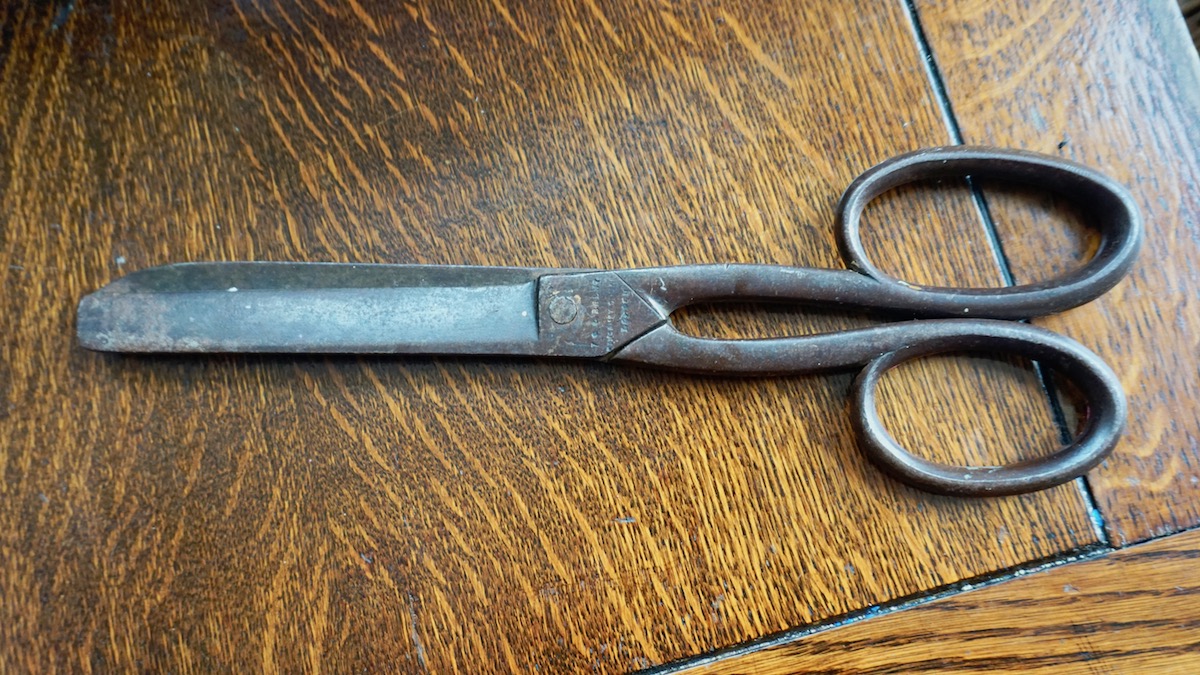 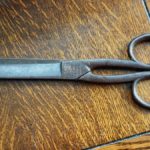 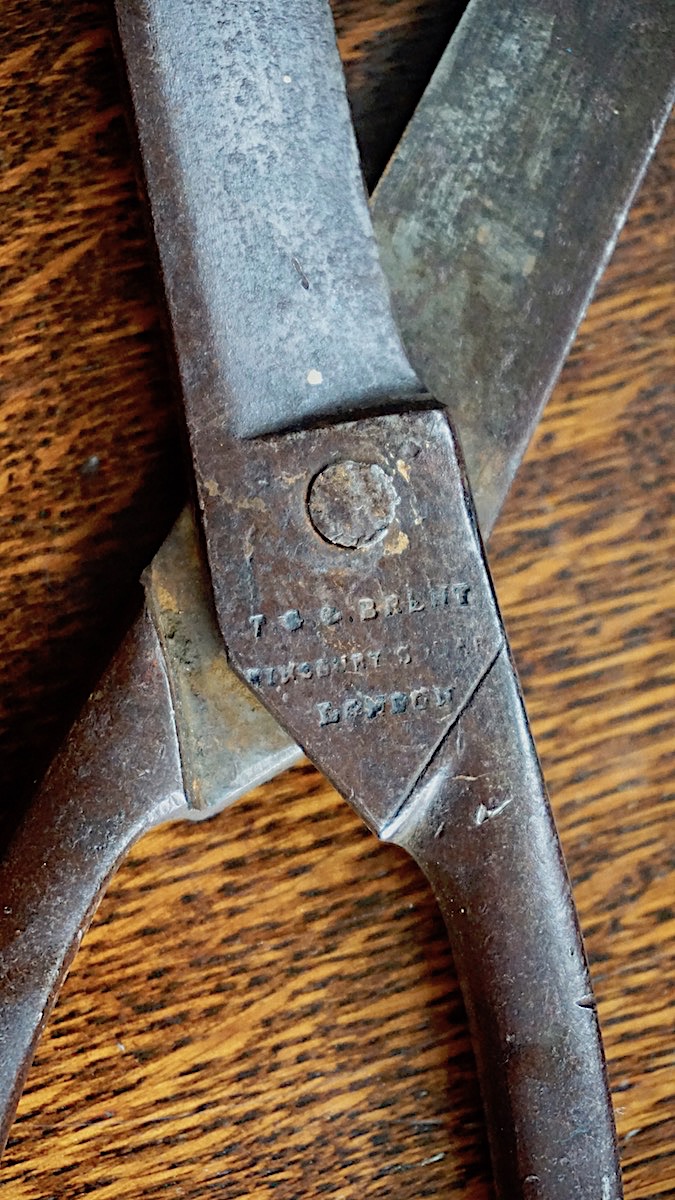 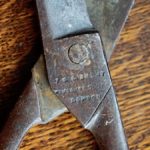 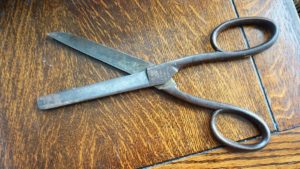 The earliest known scissors appeared in Mesopotamia 3,000 to 4,000 years ago. These were of the ‘spring scissor’ type comprising two bronze blades connected at the handles by a thin, flexible strip of curved bronze which served to hold the blades in alignment, to allow them to be squeezed together, and to pull them apart when released.

Spring scissors continued to be used in Europe until the 16th century. However, pivoted scissors of bronze or iron, in which the blades were pivoted at a point between the tips and the handles, the direct ancestor of modern scissors, were invented by the Romans around 100 AD.[1] They entered common use in not only ancient Rome, but also China, Japan, and Korea, and the idea is still used in almost all modern scissors.

During the Middle Ages and Renaissance, spring scissors were made by heating a bar of iron or steel, then flattening and shaping its ends into blades on an anvil. The center of the bar was heated, bent to form the spring, then cooled and reheated to make it flexible.

The Hangzhou Zhang Xiaoquan Company in Hangzhou, China, has been manufacturing scissors since 1663.[2]

William Whiteley & Sons (Sheffield) Ltd. was producing scissors by 1760, although it is believed the business began trading even earlier. The first trade-mark, 332, was granted in 1791.[3] The company is still manufacturing scissors today, and is the oldest company in the West to do so.

Pivoted scissors were not manufactured in large numbers until 1761, when Robert Hinchliffe produced the first pair of modern-day scissors made of hardened and polished cast steel. He lived in Cheney Square, London, and was reputed to be the first person who put out a signboard proclaiming himself “fine scissor manufacturer”.[4]

During the 19th century, scissors were hand-forged with elaborately decorated handles. They were made by hammering steel on indented surfaces known as ‘bosses’ to form the blades. The rings in the handles, known as bows, were made by punching a hole in the steel and enlarging it with the pointed end of an anvil.

In 1649, in Swedish-ruled Finland, an ironworks was founded in the village of Fiskars between Helsinki and Turku. In 1830, a new owner started the first cutlery works in Finland, making, among other items, scissors with the Fiskars trademark.

A pair of scissors consists of two pivoted blades. In lower-quality scissors, the cutting edges are not particularly sharp; it is primarily the shearing action between the two blades that cuts the material. In high-quality scissors, the blades can be both extremely sharp, and tension sprung – to increase the cutting and shearing tension only at the exact point where the blades meet. The hand movement (pushing with the thumb, pulling with the fingers) can add to this tension. An ideal example is in high-quality tailor’s scissors or shears, which need to be able to perfectly cut (and not simply tear apart) delicate cloths such as chiffon and silk.

Children‘s scissors are usually not particularly sharp, and the tips of the blades are often blunted or ’rounded’ for safety.

Some scissors have an appendage, called a finger brace or finger tang, below the index finger hole for the middle finger to rest on to provide for better control and more power in precision cutting. A finger tang can be found on many quality scissors (including inexpensive ones) and especially on scissors for cutting hair (see hair scissors pictured below). In hair cutting, some claim the ring finger is inserted where some place their index finger, and the little finger rests on the finger tang.

For people who do not have the use of their hands, there are specially designed foot-operated scissors. Some quadriplegics can use a motorized mouth-operated style of scissor.