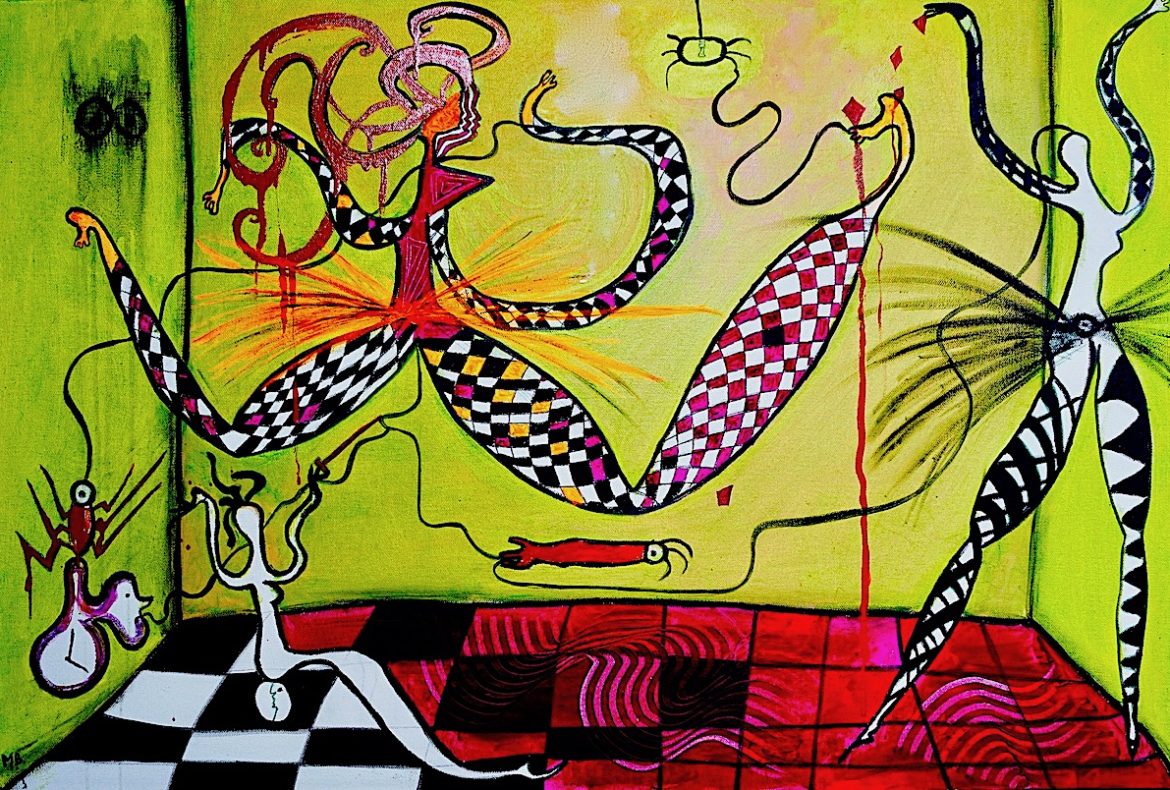 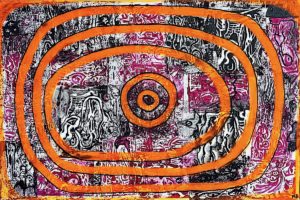 The eye, mixed media on canvas, by Mary Blindflowers©

The artist Mary Blindflowers leads to a way of colourful and undetermined images, populated with childish cutout of animals, biomorphic and thready figures, objects looking like toys, working quite exclusively with oil on canvas technique.
At a glance, these images are like suggesting a superficial feeling of lightheartedness. Although it’s only an illusory carelessness: over a sharp look, it shows through a tragic experience full of many disagreements, the core that maybe reveals the troubled character of the artist. 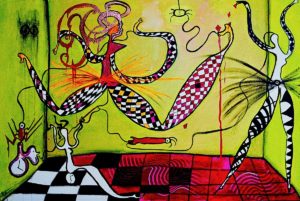 Her style of painting is the natural outcome over the realism denial and the image simplification, the figures that vivify her artworks are not simple pictures, but feelings, instant emotions and suggestions. Her reality turns into a world in between dreams and nightmares.

Her art form appears conceptual, streamlined over its shapes, with marks and symbols arranged on the canvas according a well-planned layout, just like an episode story.
Although Mary’s painting tends towards the abstraction, it still remains a trace of reality among the multi-coloured shapes drawn close each other: an eye, maybe an hand, one foot, one body …
The artist prefers, intensifying it, the emotional side of the reality rather than the one objectively perceivable. The sense of her works draws attention to a rebellion of the spirit against the matter, forcing into a point of view where “the eyes of soul” are the starting point of her poetry.
The introspective examination replaces the outer view creating, somehow, a sort of confusion between ethics and aesthetics.
This kind of language to her, reclaims in some ways, with anguish, the romantic identification between art and life. The nature of these symbolized concepts is full of social contents and dramatic proof of the reality that, sometimes with horrific scenes, shows a strong challenging attitude and it seems disputing against the society, the estrangement, the positivistic view of the scientism world and the casualities.
The artist Mary Blindflowers’ target is about finding the communicative element of the arts: simplifying outlines and shapes, abolishment of perspective and chiaroscuro, using vivid and innatural colours, over the sharp usage of pure colour and clear and marked outline. Mary claims the relevance of shapes, colours, spontaneity, although the alchemic meaning of the artwork is essential. Starting from different suggestions and incentives, she is looking forward to a meaningful world based on the freedom of portrayal: the relation with the visible reality “not naturalistic”, because the nature is interpreted like collection of symbols from where one could be inspired towards an indipendent interpretation.