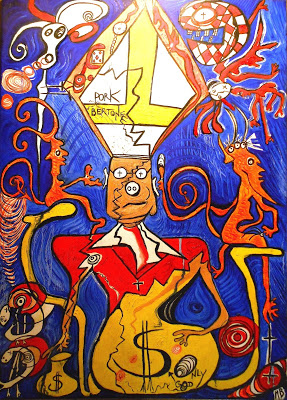 Di Alessandro Dell’Aira©
Fiori Freschi is the title that has been given in 1943 by Mario Praz to a bunch of his essays about really different subjects, drawing attention to the inappropriate language describing the cut flowers as “fresh”. The same contradiction worries Mary Blindflowers since she was born. Since Omero onwards, poets are flowers that are blind. Sometimes, only visionary. That’s why Mary has given herself this nickname. Blindflowers, as blind flowers. True born artists are visionary moles able to have astral dreams. Mary creates Rorschach’s spots and she interprets her own dreams, or nightmares’ code. Is there any difference? Analysts deal with people that want to know the meaning of dreams that have been transliterated for therapeutic reasons. Mary composes and paints: she would look inside herself asking for her own feelings to the paintings and covers that she prepares for her books.
Mary listens silently to what the other herself talks from inside a cage and she transcribes it carefully. The cage is her body. Mary escapes from the cage every morning going to work: she goes, writing and painting. At night she comes back into the cage with a bundle of new paintings and covers, her fingers smudged by the colours and extremely tired. Her dreams are looking for her at night, then they evaporate beyond the bars. Mary goes to grab them back again. Men, women, animals, foods, good demons and others, let’s say, a bit pinhead. Deus is male, not because is evil but only because is male. Deus is male, could you say is not like that, isn’t it? Anglo Latin interlingualism, half dead and half alive: the alchemical egg, a creative botch with the effect. An indissoluble totality of cover and book. On the cover there is a two-faced cardinal trying to lead on poor souls over a chess board swarmed by egg shells, pregnant phalli and pierced breasts. Inside there is (will be) a demonological essay inspired by an unreleased manuscript of an inquisitor.
The title of the cover comes first than the book and Mary explains that to Mary. It’s like Saramago, that invented the title “Gospel by Jesus Christ” before to write the book itself. Will be wizard, Saramago? Or he is only shepherd reporter from Ribatejo, born illiterate like the shepherds and the Nobel prize winners, afflicted by love-hate controlling fathers and dead many times, intermittent? Contradictions.
Subconscious expressionist, Mary doesn’t dilute the colours, screaming inside and outside herself like inside and outside the edges of Sicilian carts. The marks that she sketchs are archaic like the prehistoric shepherd ones. In England, where she lives, Mary stares at the sea dreaming about an happy island. Challenging and desecrating, she has an ancient soul and she knows it. She turns herself down to understand her soul. Men and women are cut flowers, scattered tools, deformed and ground by a prude system that massacres them to survive.
“Mr Yod could not die” is a tired god comedy. With its Egyptian rituals Yod becomes Isis, the Moon, the Life. According to Mary, Yod is a god that would like to die because somebody gives him hard time. They forced him to watch the Tv forever, fastened to a swastika-chair. The only exercise that he can do is travelling inside himself, within a cage that in this case is a whale womb.
Anarchist novels full of digged stars in black anarchy colour. The massive birth of a puerperal mouse of and elephant that reminds the one swallowed by a boa in a drawing of unappreciated Little Prince. Desecrator tall dwarfs, a bird man related to a famous publishing logo, the ostrich with a nail into its beak, that is really serious emblem, not a contradiction: the spirit digesting everything, drawn in ancient time for a refined bishop as Paolo Giovio, and the motto “Spiritus durissima coquit”: harder things are, better the soul could digest them. Mario Praz gave this idea to Einaudi. Mary Blindflowers is an alchemist. An enchanted woman, that cooks with rage and poetry.
https://antichecuriosita.co.uk/manifesto-destrutturalista-contro-comune-buonsenso/